Our Musician of the Month for January is the great gospel singer Mahalia Jackson! 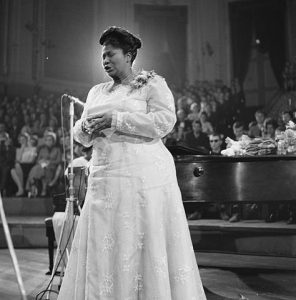 Many people do not know that the phrase “I Have a Dream” was actually nowhere in Martin Luther King’s notes for his famous speech! King knew that he would need someone to calm the crowd of 250,000 people down at the 1963 March for Jobs and Freedom in Washington DC. So he asked Mahalia Jackson to sing her song “How I Got Over” just before the speech. After that, King read the first half of his speech from the notes he had made the night before. It wasn’t until Mahalia shouted from the sidelines, “Martin, tell them about the dream!” that King went off-script, improvising in the spirit of a southern preacher. One of the most important speeches in our country’s history wouldn’t have been the same without the musician Mahalia Jackson!

Video: about the “I Have a Dream” speech

Video: Mahalia Jackson performing at the 1963 March for Jobs & Freedom